I have a handful of students who join me in a knitting class on Thursday nights.  We’ve evolved a bit from being an instructional group into being a group of women who care about one another, who also knit.  I’m still a support to them when they get stuck, but our group has become less instructional over the years.  And while this doesn’t really bug me, I do miss the problem solving and watching the lights go on as people figure out something they have never done before.

One of the things I truly love about knitting is just how clever it makes me feel.  There is no end to the delight I feel when I turn the heel on a sock, or figure out a particularly difficult stitch pattern, or put together strange colors and create something that is truly amazing. 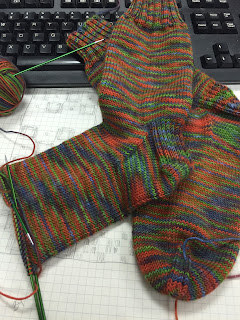 (Sock is a plain ole stockinette sock in 64 sts on a size 2.25mm needle, and the yarn is Socks That Rock lightweight in Bait-a, acquired at Erica's de-stash sale last year.)

I love that part of knitting.  But I tend to see it more in my own work than in others lately.
I posted earlier this week how much the comments from others about Saint Padraig meant to me.  I am genuinely humbled and excited by how much people have enjoyed that pattern.  Often, I’ll send something out into the world and never hear back about it.

I teach at a metro Detroit high school during the day, and one of my colleagues has sponsored a knitting club for many years.  My students know that I knit, but a different club that I sponsor has always prevented me from participating in the knitting club.  Knitting club attendance has waned and she was looking for a depository for the supplies. . .and I agreed to take them on, thinking that maybe next year, I’ll sponsor the club and be all set.

It was a LARGE box of donated yarn, needles, books and goodies that showed up one day.  “These are from Ms. Hearne,” I was told, and then the student disappeared.  What was I going to do with all of this?  Where would I find room for it? 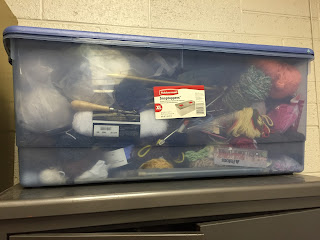 The box sat on my counter for a week as I pondered.

And then one student said she’d like to learn to knit.  She pulled a book of instructions out, found a yarn that she loved the color of, and I showed her how to cast on during passing time one day.  She tells me she knits obsessively at home.  (Oh, how I can relate.) However she hasn’t brought anything in to show me, so I’m not sure where she’s at with her obsessing. . .

Another told me she was into felting, and asked if there were felting supplies in the box.  There weren’t, but I brought in some roving donated by a Carla, and a few needles and a block of foam.  This student tells me she has been painting with yarn, and creating some lovely images. . .and was so thankful for the supplies to encourage her along.  I haven’t seen evidence of this, but I trust that it’s true.

And yet another told me that she learned how to knit when she was little, and asked if I could help her a little.  She shows up to see me every day or so to show off her progress.  She chose a carmely-tan yarn for the scarf she wanted to make, and never expecting her to be so committed; I didn’t put her off by telling her that it probably wasn’t enough yarn for what she wanted.  I just helped her cast on, and sent her on her way.

So often, I feel like that’s what I do as a learner.  Take a chunk of information back to my quiet space and then try to figure things out on my own.  Sort of like the first two girls.  I’ve got this, I think, and sometimes I actually do.  Other times, it’s a bit less successful.

What I’ve admired about girl three, is that she keeps showing up.  Every few days she’ll show me where she’s at.  I’ll give her a tip or two, and she’ll keep motoring on.  Then one day she told me she wanted to try something different.  I thought that meant she was giving up on knitting, and scrapping the scarf project.   (Aha!  I was RIGHT! or so I thought. . .)

But what she wanted was to learn a new stitch.  Her vision for her scarf was that it would be a sampler.  She wanted to try out new stitch patterns that would help her feel more confident, and learn more.  What a smart girl!  She’s moved through garter stitch, 2x2 ribbing, moss stitch and is now working a 1x1 rib.  I checked in with her about length and colors and coached her to turn it in to an infinity scarf when she’s done.  I think that the 220 or so yards in her skein will be perfect for that application. 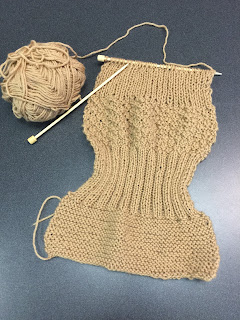 She has dodged the boring first scarf, and turned it in to something that she can learn from.  Something practical.  Something that’ll make her feel clever when she puts it around her neck.  All that knitting should be.  She likes the undulating width of the project, and thinks it's going to look smashing when it's done.  I agree.

All of this made me curious.  What was YOUR first knitting project?  What do you use as a teaching tool when someone you love wants to learn to knit?  And what are you doing NOW to keep growing your skills?

If you’re looking for a sampler-like project, I adapted Danielle LaFramboise’s windmill bag pattern a few years ago into a multi stitch sampler bag called the Sassy Summer Satchel.  It’s  a fun knit, and you can use colors that make your heart sing, and choose the stitch patterns that are most intriguing.  Best of all?  It’s a free download on Ravelry, and well tested by the 1,841 of unique downloads it’s had over the years.

If you do decide to cast on, don’t be afraid to let me know about it.  It’s a great bag.

And if you're struggling with your knitting?  Show up.  Ask for help.  Knitters make for great community, and your LYS or community center is bound to have classes--and if they're full and you live locally?  Let's chat.  It'll be fun to grow my community again.  You can never have too many knitting friends in your life. 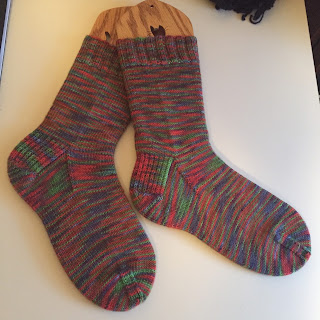 P.S.  I just saw that . . .Have You Any Wool? in Berkley has added another Fair Isle class if you're still itching to try casting on a Saint Padraig before St. Patrick's Day!

Thanks for reading, I'm eager to read what you have to say in response. Your comments help me feel that I'm not writing into a void. . .keep them coming!