And maybe a blogger who posts more often? Join Suzanne and leave a comment for a give away. . .lots of good prizes to be had there. I'm slogging away at the applied i-cord edging of my graduation afghan. . .and watching the closing ceremonies for the Olympic Games! You can find Suzanne here. . .
Posted by Tanya at 8:51 PM No comments:

The internet has made such changes in our lives, it's hard to remember how we actually functioned prior to it being a household staple. I have boxes of books that were kept as reference books, but have been packed away for the past 18 months in hopes of home repairs happening. Now that they are about to start, I'm realizing that I can probably just donate the books and never really miss them. Any research I'll be interested in can just as easily be done on the internet or at the public (or school) library. Can't I just release my belongings and gain a little bit of space in my home? We'll see how much I've been influenced by my family and how much I can actually let go of.

Some research I've done lately has been to look up people I was once friends with. . .due to a variety of circumstances we've drifted apart, and I have no real desire to strike up a friendship with many of them, but I'm interested none-the-less. I found a college roommate has divorced, remarried and apparently has two children and is now a SAHM. . .another is struggling with weight loss. . .another had a significant weight loss and is now married. . .and yet another has done some amazing freelance print designs for companies like Coach. . .While I enjoy finding out what former friends are up to, I find it somewhat creepy that I can learn so much without actually contacting them to let them know I'm looking. I find it a curious thing to be able to be curious. . .and stealth. Google yourself. . .see what you can find out about YOU. . .and then change your security settings.
Posted by Tanya at 6:33 PM No comments:

Really? a little bit of knowledge is a dangerous thing. Editing my posts suddenly became a HUGE Challenge with this new background. . .what was I thinking? Now I have a whole new learning curve to deal with.
Posted by Tanya at 11:22 PM No comments:

Chelsea Fleece Fair tomorrow? Not sure.

No Casting on for Lent? Not sure. . .but I cast on a new hat today just to see how I felt about it. . .no guilt here! 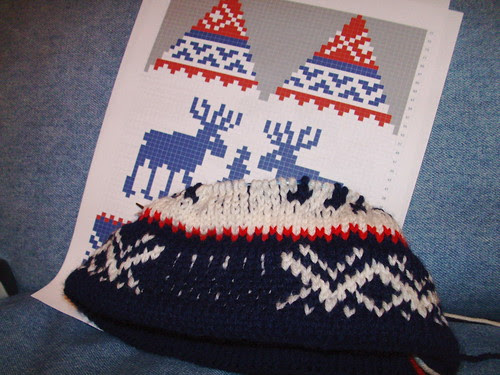 I cannot complain enough about how hard acrylic yarn is on my hands! Even so, here is the Moderne Baby Blanket--upsized for a teen aged boy. All it needs is a few ends woven in and an applied I cord edging and I can call it done. 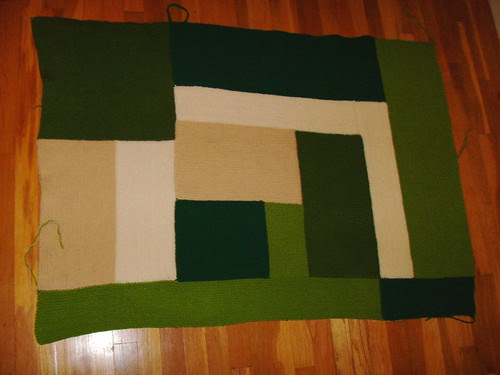 Here too is the completed gray afghan started at the beginning of the Olympics. You'll find me with a darning needle in hand tomorrow attempting to finish these both! 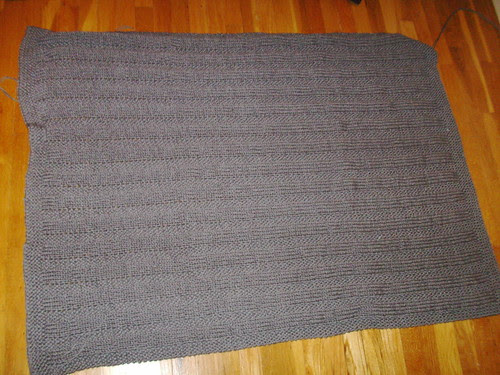 Apparently I cannot stick to a schedule or keep a commitment! I awoke this morning to realize that I had not posted last night, and was frustrated that I wasn't even able to maintain a promise to myself for even three days!

Progress on the afghan is slow. I'm pleased that one is finished and am hopeful that the other will be completed this week prior to the end of my vacation. The VERY old orlon/acrylic yarn is very tough on my hands and I find myself moisturizing far more than I typically do to combat the scratchy, sore spots I'm finding as I work. In an effort to continue making progress, I'm taking small breaks to walk Toshi or to work on my Master Knitter class. I was able to make significant progress answering questions today, and have nearly half of the swatches knit from some time ago. It is unclear if I'll be able to have it ready to mail by the end of the Olympics, but I'll surely be close. Either way, progress is being made and I feel positive about that.

No pictures today, but here is one of the book reviews I've written as part of the Master Knitter curriculum. . .hope you enjoy!


The Knitter's Book of Finishing Techniques, by Nancie Wiseman

Often knitters are stumped when a pattern leaves them only with the directions to “increase evenly”. At times, knitters may become caught in a rut and only use one cast on for all of their projects, or may become stymied by why a designer chose a particular technique that is out of their repertoire. These are the times that The Knitter’s Book of Finishing Techniques by Nancie Wiseman comes in handy. Each chapter addresses a specific skill needed to have a well finished garment, and begins with the cast on and works through the bind off and finishes of a project. Clear directions for often unused cast-ons like the picot cast on or tubular cast on are included with small, but clear, pictures and drawings the accompany the text describing how to complete each technique. Everything from increases and decreases to how to treat selvedges, seaming and adding zippers is included in this small, handy reference book. The chapter I turn to most often is the chapter on button holes. Eight different button holes are described and a handy worksheet to determine buttonhole placement is included making this so much clearer than most designers instructions to “place buttonholes evenly”. The hard cover, with internal spiral binding makes the book sit flat as you read and knit through each of the techniques. If all of these features are not enough to convince you to add this book to your knitting library, the list of benefits and drawbacks for each technique may be just enough to tip the scales. As each technique is described, Wiseman teaches knitters to consider carefully why they would use a technique in their project. Gaining an understanding of not only how to complete a certain technique, but why it would be used, or when it would be useful makes this an invaluable addition to a knitter’s own reference library.
Posted by Tanya at 10:02 PM 1 comment:

My first afghan is finished, save weaving in the ends. . .I'll likely do that on Wednesday when I get together with some knitting friends. A relief to have one of the four I'd like to have ready by June completed!

And so, on to the next. The Moderne Log Cabin blanket I'm making out of REALLY OLD acrylic yarn for another student is hurting my hands already. I completed one more block of it today, hope to get another section or two done tomorrow--and take some pictures to post. The garter stitch is enough to make me want to poke my eyes out, but only two sections and miles of applied I-cord and it's done.

Four years ago during the Olympics, I was knitting here: 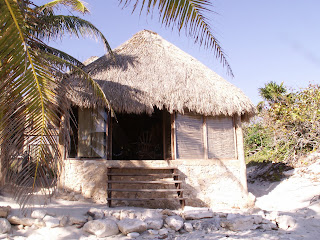 I have to say that while I think our snow is lovely, the cabana on the beach in Tulum was much nicer. . .
Posted by Tanya at 11:19 PM No comments:

A good workout, breakfast with friends, a nap, time with my spouse, and time knitting on the couch. A perfect Sunday. . .and makes this: 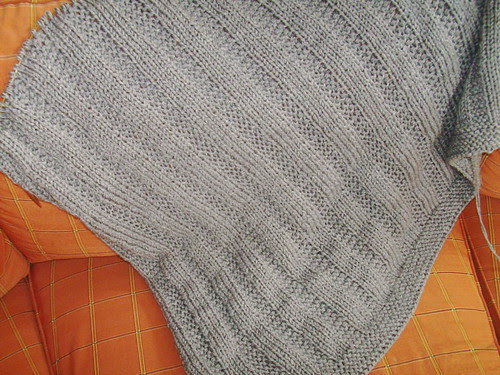 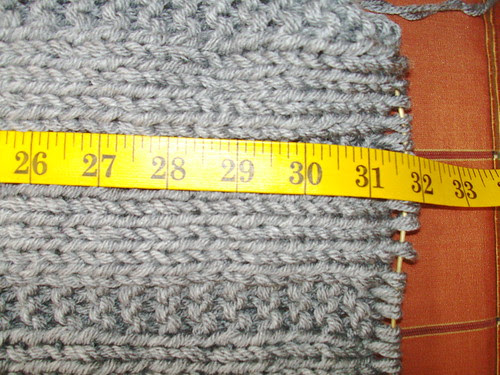 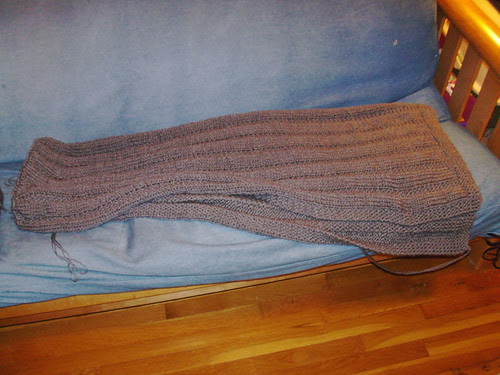 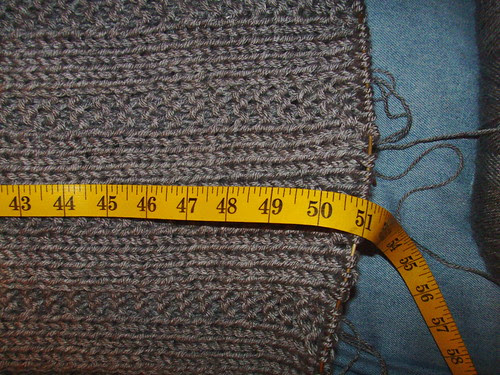 According to the pattern, I've made it long enough, but I'm thinking it should be a wee bit longer. Tommorrow morning will help me make the decision--truth be told, I'm bored with it already and may call it done with the addition of the final edging.

Details can be found on Ravelry.
Posted by Tanya at 11:39 PM No comments:

Knitting graduation present afghans. . .two to be exact. And completing my Master Knitter Level 2--boxed and ready to mail. So many knitters here. . .so many beautiful projects to come.

Another challenge? Post to the blog daily. Keep in touch, and good luck with your own Knitting Olympics project.