And here is the Knitting at Knoon version I knit this week.  It will go in a special Easter basket next month. . .but I'm trying to be proactive and get things done early!

I added a new bit of technology to my life a little more than a week ago.  While I'm absolutely loving learning all of the bells and whistles, finding new apps, and figuring out how to make this a productive item for me, it's also been a bit of a time suck.

So, I guess my question is, how long does it take you to turn a learning experience into a productive experience?  I'm willing to put in the time now--I can see the advantages in the long run, but it's seeming like a forever process right now.  I can tell I'm already gaining speed, and can quickly navigate between many different tasks. . .but still.  I have yet to update my calendar to include all of the things I had on my old phone, and am dreading the task.  Once my personal calendar dates are added, I'll have to update all of my school calendar events. . .I know that once it's done, it will make me VERY happy.  It's the getting there that is the problem.

On other fronts. . .the "Princess Sleepover" has an official date.  Princess Monkey Toes and Baby O (who's not such a baby any more, she just turned 3!) will be spending the night at our house early in April.  I have my Glinda costume all ready to wear for the evening, we have The Princess and the Frog ready to go in our NetFlix queue, pink and purple sprinkles for the cupcakes we'll decorate, fairy tattoos and coloring sheets, princess necklaces to make, and at least one mom looking into roller skating for Saturday afternoon.  Baby O has renamed Toshi "Princess Brown Cupcake" so that she'll fit right into the themed evening.  We may even have twinkle lights and decorations. . .The girls are excited, their parents are planning to send their boys elsewhere so they'll have a free night, and Joanie?  well, she's just shaking her head.

I've also begun knitting small toys for Easter baskets--it looks like we'll be making up six of them for friends' children this year. . .hopefully you'll see a knitted dinosaur in the next post!
Posted by Tanya at 11:35 AM No comments:

Or maybe a week late?  Our monthly guild meeting was last Tuesday, and I cannot believe I haven't taken the time to post anything since then.  That one late night early in the week seems to sap me of energy for the rest of the week!

We had a guest speaker, Christa Newhouse who is the owner of Yarn Dreamer and Insel Haus.  She told us she knits every day from short bits up to 18 hours a day to complete the designs she's working on.  I've seen much of her double knitting work in the past, but still, to see it all in one place is truly awe inspiring.  I took a few pictures of some of her newer pieces.  She's begun to work with brioche stitch as well, and spent the bulk of the evening showing us how to use the "knit one below" method of producing a brioche sampler scarf.  The color is a bit off, but I hope you'll get the idea. 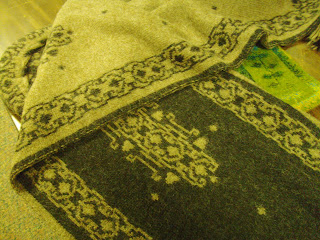 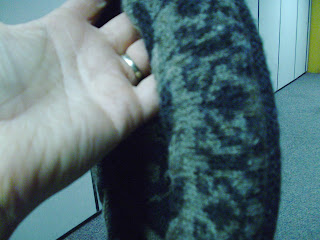 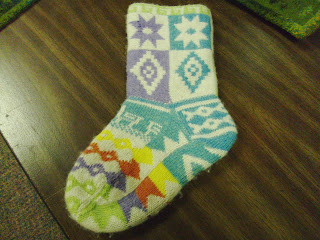 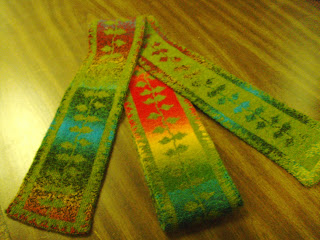 For show and share, many guild members had their Woden hats to share. . .it was flattering and humbling to see how many spent time working on my pattern and to hear their joy with the completed project. 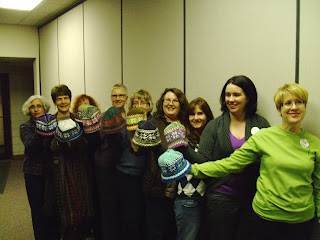 And Jo wasn't at the meeting, but showed me her completed hat later in the week. . .Like it? 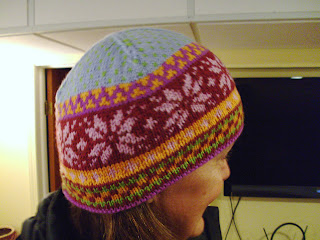 So, my dear friend Kim seems to get me into things more often than not.  I'd say she was a bad influence, but it just isn't so.  Kim is the kind who says, "Gee, wouldn't this be fun?  Let's do it together!" in a not so sneaky way to enlist my help.  To be fair, I've done the same with her. . .as is evidenced by the thriving knitting guild that we both belong to and love so much.

Herein lies the difference.  When I say, "Wanna?" to Kim, I actually do.  I jump in along with her, and follow through. . .Again, let me cite the Black Sheep Knitting Guild.  Kim?  Not. So. Much.  Need evidence?  Just look back to Shalom.  Ask Matlie if she has actually knitted a swatch for that sweater.   The not so public evidence lies in a pair of firestarter socks that she couldn't turn the heel on. . .I got the heel turned, and then sat waiting for her, and she never (EVER) picked them up again.  (She swears she's going to make them.  Uh huh.)  I have a partially completed Mystery Stole #3 that I was waiting for her to catch up to me. . .she's since thrown it in the trash.  Yes, I said she's thrown away wool.  Shouldn't she be banned from LYSs everywhere for a crime like that?  Heresy I say.  Kim swears there was a hole in it that could not be repaired. . .I never saw it.  My shawl?  It's in my HUGE pile of UFOs.

You'd think I'd learn by now.  You'd think when Kim says, "Wanna?"  I'd smile a little Mona Lisa smile and say, "Sure" and keep on knitting whatever my heart desired.  She must have some sort of spell on me, because I NEVER learn.  We decided to do a Liesl KAL this month.  I dropped the vest I was working on, and pulled the wool I wanted to use out of hibernation. . .I cast on on March 1, actually AT Kim's house with her. . .I had testing all week.  I knit WAY less than I normally do. . .early in the week, she made it sound like she was cruising with comments like "How many repeats did you do to the armpits?"  I pulled the knitting out and worked all weekend, trying to catch up.

Guess what I found out on Saturday?  KIM is knitting a baby afghan.  Not ONE baby afghan, but she needs to have TWO of them done by the beginning of April. . .AND a baby sweater.  Seriously?  How did I get sucked into this AGAIN?  Yes, Kim.  This is public shaming here.  Public shaming ON YOUR BIRTHDAY no less.  (Happy day, by the way!)  You were the one texting me this week asking for more blog posts.  You were the one who agreed that knitting a Philosopher's sweater this month would be too much with your broken leg.  You were the one who said, "Why yes, let's knit a Liesl."  Her sweater may not be finished this month she says. . .I'm shocked. 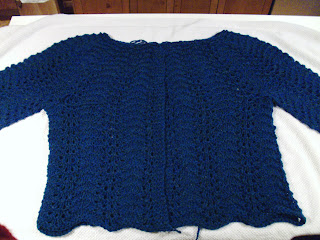 I'll be wearing it to guild tomorrow.  I'll miss you, and I wish you could come out to play. . .but I'll be wearing my 7 day Liesl.  Thanks for the KAL.

PS.  Joanie wants you all to know that she's sick.  She has the stomach flu that I had a week ago.  She's near death.  Seriously.  I hope you don't get it too.
Posted by Tanya at 6:32 PM 1 comment:

Do you remember this test?  How long ago was it that you had to sit for hours and prove to prospective colleges exactly what you remembered learning, and how quickly you could recall such information, and how well you could synthesize your knowledge and skills?

Every March, Juniors across the state of Michigan get to prove their skills as part of the No Child Left Behind (NCLB) legislation by taking not only the ACT test, but the Michigan Merit Exam (MME) and Work Keys portion of the ACT.  This amounts to three days of testing.  If you're a capable student, who learns as easily as the kid in the next chair, that means you've got a full day of testing today, and two half days tomorrow and Thursday. . .if you're not so capable and are granted additional time, you may have a full week of testing. . .with no real breaks.  Meanwhile, your classmates go to classes in the afternoon and are instructed, given homework and move on in their lessons--you'll have to catch up next week.

To say this is an intense week is to put it mildly.  Students are stressed because of the testing.  Teachers are stressed on behalf of the students, as well as concerned that they follow the letter of the law with the very stringent testing guidelines.  In the past week, I've read nearly 100 pages of testing protocol to make sure the rules haven't changed, and that I'm not going to invalidate anyone's test scores.  Administrators are stressed making sure that we're all doing our jobs. . .and parents are stressed hoping their children test well and their scores eventually lead to the college and career of their child's dreams.

Never-mind that I can knit without looking at my hands, and that I could have a beautiful garter stitch scarf completed at the end of the three days, or that my stress level would be reduced if I could move in some way, or that perhaps my students would feel less stressed without such intense scrutiny.  If I'm found knitting in a testing room, I invalidate a room full of testers.

I normally cannot knit at work.  Typically this would not be a huge problem.  But for the next three days, I'll be sitting in a room with about six students.  They'll be silent.  They'll be focused on their tests.  I'll be able to do nothing but sit there, watch them, and fill out a few forms.

While you're at work for the next few days, hopefully being productive and making the world a better place, please send some zen energy to me.  Say "Ahhhh" a few times for me.  Think calming thoughts.  Maybe knit a few stitches on your lunch break.  I'll be proctoring the ACT/MME tests.

If you know a high school junior?  Give them a break this week too.
Posted by Tanya at 6:03 AM No comments: